The doctor’s office at the turn of the twentieth century now seems completely unfamiliar to us. The typical physician of our time operates out of a hospital or office complex with a vast array of high-tech equipment. The doctor’s office of the past, however, was quite different. Physicians in the 19th and early 20th century typically operated out of the front room or parlor of their home or had a two-room office (waiting room and examination room) on their property that was detached from the house. In the case of larger cities such as Youngstown, however, doctor’s offices were usually located in the downtown business district, typically on the second floor of a building. While some offices had the waiting room separate from the examination room, it was quite typical to have the two rooms combined, much as you see here. This situation was not practical or efficient and patients often complained about being examined in front of others. The interior of doctor’s offices at the turn of the century was not particularly attractive. They were extremely cluttered and quite simple.

The interior of most offices consisted of an examination table, the doctor’s desk (usually cluttered with books, papers, and bottles), a few chairs for patients to wait, and a spittoon–a necessity in the tobacco chewing days. It was proper and common for the doctor of this period to display his library, microscope, diplomas, pictures of eminent professional friends and teachers, or anything else that was especially associated with their medical studies and career. Although doctors were advised to keep objectionable objects such as skeletons and anatomical specimens hidden from the public eye, many had a human skull or a whole skeleton in plain view because it exhibited their knowledge and interest in anatomy.

To see specific data about the number of doctors in Youngstown, their offices and specialities, see this post.

The doctor’s office of the 1930s was quite different from that at the turn of the century. After 1910, the doctor’s office changed drastically, which is most commonly linked to the result of the practice of asepsis (the prevention of infection by maintaining sterile conditions) and full understanding of the germ theory of disease. Now, it was essential to have an office that could be kept clean and germ free, which is reflected in the appearance of the office. The furniture of the 1930s was typically made of metal with white enamel coating. Other appliances were also white, however, white walls were considered “cold” and “cheerless.” During this period color was believed to have a powerful impact on mental state; therefore, yellows and greens were used most frequently because they were considered the most cheerful and tranquil. Office floors were typically black and white inlaid linoleum with a marbleized effect (as seen here) because it was light and clean.

Whether in a private residence or more commonly in a downtown building, the doctor’s offices of the 1930s were well planned. The new complex consisted of a reception room, private office and consulting room, a dressing room, a business office, rooms for physical therapy treatments, and an examining room (seen here). The contents of the examining room are: stool, examining table, floor lamp, instrument cabinet, scale, sink, and waste receptacle. A specialist’s chair and specialist’s cabinet, used for EENT (eyes, ears, nose, and throat) examinations, testifies to the rise of specialties during this time. Laboratory equipment can be seen on top of the table. Blood and urine tests were more common at this time than in 1905. An electric sterilizer for cleaning instruments also appears, which attests to the new understanding of the germ theory. The anatomical chart takes the place of the skull in the turn-of-the-century office. 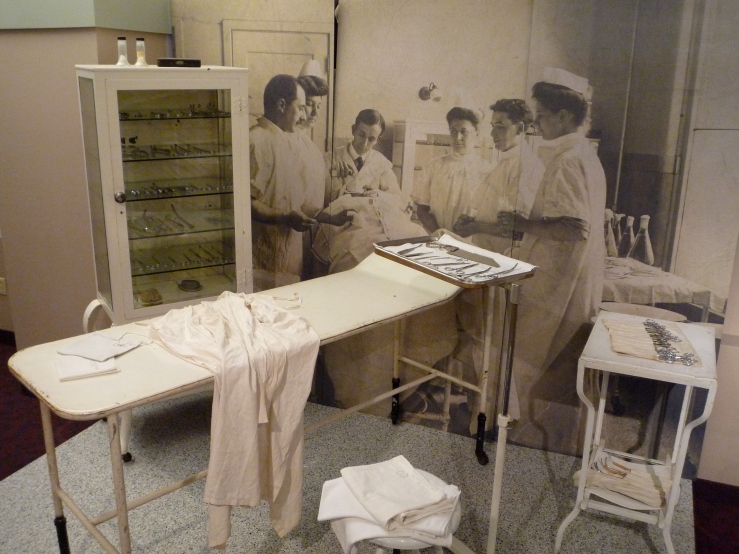 This display of an operating room around 1915 contains a metal operating table, stool, instrument stand, and instrument cabinet. The photograph in the background, which shows an operation in progress at the South Unit of Youngstown Hospital at this time, puts the furniture into context and helps the visitor to visualize the reality of surgical practice.

During this time, the operating room lacked the modern conveniences that would be present only ten years later, such as oxygen tanks, anesthesia machines, and electric lights. Although the furniture is metal painted with white enamel, which attests to the rise of the practice of asepsis, the surgeon and assistants do not wear rubber gloves, which indicates that this practice was not widely accepted. Operating procedures still had a long way to go.

During the late 19th century, dentists, like doctors, typically set up shop in the front room or parlor of their homes, as seen here. As the number of professional dentists increased and as cities became more populated, dentists–like their medical counterparts–relocated to cities and established their practice on the second floor of a downtown building. The typical items located in the turn-of-the-century dental office were a chair, cuspidor, wash bowl and basin (or sink depending on the availability of plumbing), and a foot powered dental drill. Although the S. S. White Dental Manufacturing Company marketed the first electric-powered dental drill in 1872, the majority of dentists continued to use the foot driven drill well into the twentieth century because most offices in the country were not electrified. The lack of electricity also resulted in dental chairs being placed in front of a window for a light source.

In the 1800s, most dental offices lacked not only electricity but plumbing as well. Patients rinsed their mouths and spat into an old-fashioned brass bowl that was usually attached to the chair arm. Even when the spittoon was enclosed in an attractive cabinet, it still had to be emptied by hand. The first self-cleaning cuspidor (the Whitcomb Fountain Spittoon), was introduced in 1867, but was not widely used because it required modern plumbing. The reclining dental chair seen here, made by W. D. Allison Company, was one of the first all-metal dentist’s chair. Although German physicist William Conrad Reontgen had developed the X-ray machine in 1895, and Dr. C. Edmund Kells developed it for dental uses shortly thereafter, dentists were very slow in adopting the remarkable new tool. In fact, as late as 1909, only twelve dentists in the United States used X-ray machines, which explains its absence from the office seen here.

This office was quite different from dental offices at the turn of the twentieth century. Like the doctor’s office of the same time period, the choice of color was quite important. Shades of yellows were used on the walls and moldings because of its calming and cheerful effects. Dental equipment had also advanced since the turn of the century. The dental chair in this office, made by the S. S. White Dental Manufacturing Company, is hydraulic. The dental unit (produced by the Ritter Dental Manufacturing Company), which combined many elements in a single piece of equipment–drill, lamp, and cuspidor–marked a great step forward in efficiency. The X-ray machine was also found in just about every dental office since the 1920s. The X-ray machine seen here, patented in 1921 and 1925, was made by the Ritter Company of Rochester, New York and was the newest in design. Also of note is the dentist’s stool. In earlier days dentists stood while working, but in the 1930s dentists sat, as did the dental hygienist.

25 thoughts on “Doctor’s and Dentist’s Offices”